Relaxing music that takes you into Dreamland. Tierra de sueños (Dreamland) contains pieces in various styles gravitating to different guitar sounds. It is simple and straight with pleasing harmonies, like the feelings and sensations that reflect the magic of the moment when the sun sets, the day ends and the night begins...

01 PASAJE HACIA LA TIERRA DE LOS SUEÑOS (TICKET TO DREAMLAND). It is a song where the synthesizer and the soft notes of an acoustic guitar, create an ambience where it is possible to imagine the horn of ship that starts sailing through the mist towards an unknown destination.
02 UNA NOCHE DE VERANO (A SUMMER'S NIGHT). In this song, the guitar uses the melody to transport us to a warm summer's night full of good sensations.
03 REFLEXIONES (REFLECTIONS). An acoustic guitar and a melody invite reflection.
04 PAISAJE NUBLADO (CLOUDY LANDSCAPE). The synthesizer plays a dance in which it paints the sky with watercolors.
05 LIBERACION (FREEDOM). Nacho Serrano participates playing a guitar arrangement in this triumphalist song where the electric guitar and the bass guitar establish their own dialogue.
06 PEQUEÑA ORACION (LITTLE PRAYER). Jose Escudero plays the flute in this intimate song that begins with a simple melody.
07 CONFIDENCIA (SECRET). The night falls over the countryside, it's time for sharing secrets.
08 ILUSIONES DE JUVENTUD I (THE HOPES OF YOUTH. Part I). Looking forward, what will the future bring us?.
09 LA ESPERA (THE WAIT). A guitar arpeggio reminds us of the sound of the clock while the hours tick away.
10 CAMPO SOLEADO (SUNNY COUNTRY). There is nothing like travelling along country paths in summer.
11 PEREZOSO (LAZY). The day wakes up slowly and some guitars dialogue over a lazy rhythm.
12 ILUSIONES DE JUVENTUD II (THE HOPES OF YOUTH. Part II). A version of track 08.
13 BAJO EL FIRMAMENTO (UNDER THE FIRMAMENT). Laying on the grass, watching the stars.
14 ESPERANZA (HOPE). The last song of the CD. An expression of contained rage for all the things that don't work in this world and an open door for the future. Nacho Serrano participates playing part of the electric guitar solos.

Some ideas from the years 1993 and 1994 that I collected as "moods", formed the basis for composing my first album. That time, I was 18 years old and had many dreams, which are reflected in the character of many of the pieces.
Talking about composition, it is simple and straight with pleasing harmonies, like the feelings and sensations that I wanted to transmit. In the same way, for its design I chose a sober composition, using pictures of sunsets that reflect the magic of this moment when the sun sets, the day ends and the night begins.
I started to prepare the pieces in 1999 and I finished the mixes in 2002. All this time allowed me to polish up the pieces in my personal recording studio, until I was satisfied with the quality of sound and music. 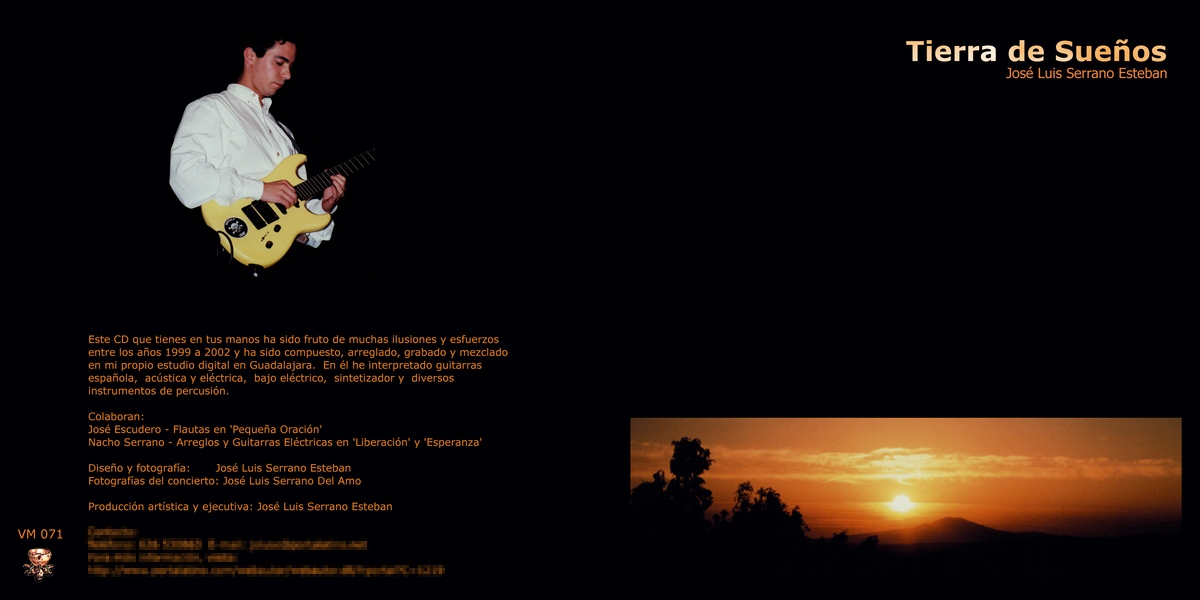